Get ready for the 2013 Green Energy Competition between West High and Memorial High! The school that reduces its school-day energy consumption by the largest margin over Tuesday, February 12th to Friday, February 15th will receive a grant of money to further green the school.

To help us win, Green Club developed a pledge drive to directly involve the student body and staff; the Pledge Drive started yesterday (February 6th) and will continue until next Friday (February 15th). In just two days, we have collected nearly 150 pledges from students and teachers at West! Popular pledges include reminding teachers to turn off their lights, dressing in layers so teachers can turn down the thermostat, helping teachers pull up blinds to use natural light, and volunteering to turn off computers after school.

If you haven’t yet pledged to help Green Club win the Green Energy Competition, no worries! We’ll be at the Ash Street entrance before school and during lunch all through next Friday, February 15th, so hope to see you there! Also, help us spread the word by telling your friends and teachers about the Competition and by inviting your friends to join the official Facebook event.

Feel free to email us at mwhgreenclub@gmail.com if you have any questions, comments, suggestions, or ideas!

See everyone at the Pledge Drive, and let’s win the Green Energy Competition for West!!
Amy Hua

Alrighty  – I’ve been snapping pictures of effective recycling centers, so I’m going to post them all here, and we can have a discussion about why/how they’re effective during our next meeting. Additionally, think about how we can model this at West, so that we don’t have mixed recycling/garbage in every single recycling or garbage bin.

This was taken at a café in Chicago. Look how people actually respected the signs:

The street recycling system in Chicago. Note the specialized holes for each item in the recycling bin, and how people have to push a flap to throw stuff out (aka it’s easier to recycle your can than throw it out) 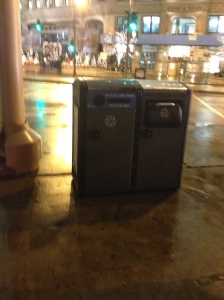 Here’s the recycling center at Whole Foods in Madison. We’re 80 percent of the way there to having a similar set up in our West High LMC Recycling Center.

Here’s the trash system at Whole Foods in Madison. Note how they have pictures, descriptions, and even EXAMPLES of what you can throw out in each bin. People respected the signs here too! 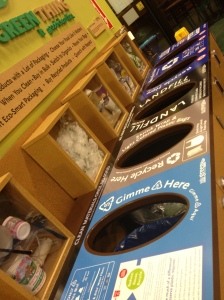 Based off what you see here, what do you think we should take from these successful recycling systems and implement at West? Either comment with your ideas here, post it on the Facebook page, email me, or bring it to our next meeting!

I enjoyed taking all of these pictures! Perhaps I’ll also do a post with unsuccessful systems – or post pictures of how our school’s current “recycling” system is a failure and how we’re going to fix it.

Happy holidays! Check out the snow on our blog!

Even though we’re in Wisconsin and it’s already December, we’re experiencing unusually warm weather. A lot of people are hoping fervently for snow, but with all these erratic weather patterns around the world (hmm…could it possibly have something to do with global warming?!), we’ll just have to see…

We had a Green Club meeting after a string of no school days. It felt great to get back to business!

We took a break from project planning to work with our local branch of Citizens Climate Lobby, an organization dedicated to promoting legislation on environmentalism, by motivating our legislators to act on climate change.

We wrote a total of eleven letters to our newly elected Senator Tammy Baldwin, encouraging her to make legislation on climate change one of her top priorities. Mr. Grady discussed the proposed carbon tax, and many members asked Tammy to consider its implementation and help generate publicity on it. We also wrote about what global warming means to us personally and why we care, and we learned about how climate change has affected our local area.

Meanwhile, some of our club members worked on procuring “Remember…These Come from Trees” stickers for the new paper towel dispensers West High School implemented. (Thanks, Eli, for taking the initiative!) Green Club hopes to fundraise enough to get hand dryers for the school, a green alternative to using paper products. More updates to come on this project!

“These Come from Trees” stickers on paper towel dispensers at West High School.